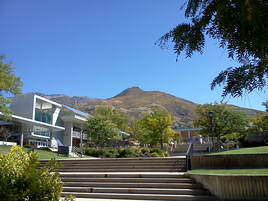 Our work as the energy program consultant for Weber State University for over ten years illustrates how the full range of our capabilities was engaged to help the University develop long-range energy and sustainability plan.  We helped create the Weber State Energy Team and then worked closely with them to identify opportunities, perform energy and cost/benefit analyses, manage implementation and document savings for energy projects.

Ultimately, we built an Energy and Sustainability Investment Plan (ESIP II) to provide direction in multiple areas over a period of twenty to thirty years to achieve the University’s commitment to carbon neutrality.

This program to date has reduced the University‘s energy use per square foot by nearly 50% from the 2009 baseline representing a savings of $2 million last year alone.
The complete ESIP II, prepared by E/S3, is published on the Weber State Facilities Management Energy and Sustainability Office website at:  https://www.weber.edu/sustainability/esip-plan.html
Energy Saving Investment Plan (ESIP)
Weber State University is one of E/S3’s oldest clients beginning with developing the University’s original Energy Savings Investment Plan (ESIP), published in 2007, which established a methodology to identify, manage, fund, evaluate the performance, and sustain the benefits of energy and water saving projects over a time frame of approximately five to ten years.
The ESIP developed by E/S3 also included recommended improvements to the University’s organizational structure, as well as communication and education programs for long-term sustainability of the Plan.  It has served as the University’s governing guide for energy and water efficiency and other improvements for the last several years.
This effort included determining the energy and water conservation goals of the University; assessing existing conditions with campus buildings and systems, performing utility bill analyses and development of an energy baseline; identifying and providing evaluation of potential energy conservation measures; developing acquisition and financing strategies; and performing employee surveys and analysis to assess energy awareness and attitudes.
The ESIP developed by E/S3 also included recommended improvements to the University’s organizational structure, as well as communication and education programs for long-term sustainability of the Plan. The ESIP is fully detailed in a manual authored by E/S3 and has served as a strong foundation for the University’s subsequent development of project and programs.
Energy Performance Contract Program
Following the plan in the ESIP, E/S3 worked with the University to develop a program for an Energy Saving Performance Contract (ESPC) project.  This entailed creating the Investment Grade Audit and Energy Performance Contract documents including close association with a Utah State Assistant Attorney General for review.  E/S3 created the Request for Proposals for contractor selection; reviewed contractor responses; prepared interview questions and scoring worksheets; and participated in ESCo interviews and the selection process as an advisor to the University.
Following contractor selection E/S3 was responsible for monitoring activities during the energy audit, facilitating audit and project development meetings and reviewing the Investment Grade Audit Report for technical and financial reasonableness, appropriateness of the proposed the measurement and verification plan, and conformity with the University’s goals. The processes and documents developed by E/S3 for the Weber State program provided models and the impetus for the State Energy Office to launch its current EPC program for all public entities statewide in Utah.
Energy Program Consultant
When the Investment Grade Audit Report and Project Proposal that was developed by the ESCo did not include several measures and improvements that were critical to the University’s decision to utilize an ESPC, the University decided to pay for the audit and pursue self-implementation of measures identified and other needed improvements that were not included in the ESCo’s proposal.  This created in effect an “internal energy services company” at Weber State, one of the first in higher education.
E/S3 was again hired to provide on-going program consulting to assist the University and support the efforts of Facilities Management for implementing energy improvement projects.  The first effort in this program was to help the University with developing an initial prioritization of projects along with identifying how funding might be obtained.
E/S3 worked with University staff to develop a case for creating an energy project line of credit from the University’s internal funding to finance the costs of the energy improvement projects identified with repayment, including interest, from the energy cost savings from projects implemented.  This approach was approved by the University’s Administration and Board of Trustees with an initial amount of $5 million made available.
Energy and Sustainability Investment Plan (ESIP II)
Building on the original ESIP, E/S3 completed and published the long-range Energy and Sustainability Investment Plan (ESIP II).  The goal of the ESIP II is to strategically guide the University’s efforts toward sustainability and achieving its commitment to carbon-neutrality in its facilities by or before the year 2050.
This work included a comprehensive review of the implementation status for the original ESIP.  The ESIP II was then developed to include the elements needed to accomplish the University's goals, including current successes, mechanical infrastructure and plan for carbon neutrality in campus buildings, organizational improvements, outreach, and the necessary funding structure to support the plan.
As part of ESIP II development E/S3 professionally facilitated a “Futures Workshop” for the purpose of gaining a larger perspective on the future of the University.  Participants consisted of a diverse group of people consisting of Administration including Vice Presidents and the Provost Office, Academic Deans and Professors, Students, and representatives from Facilities Management and Information Technology.
The complete ESIP II, prepared by E/S3, is published on the Weber State Facilities Management Energy and Sustainability Office website at:   https://www.weber.edu/sustainability/esip-plan.html
In-House Recommissioning Program
Along with developing the ESIP II, E/S3 helped Weber State to create a recommissioning program that is being implemented in-house by Facilities Management staff.  This program is a major part of the University’s carbon neutrality strategy because it identifies energy efficiency and operational improvements that reduce carbon footprint.
Program development included performing targeted recommissioning efforts at the Hurst Center for Lifelong Learning on campus.  This 42,000 square foot LEED Silver Certified building was constructed in 2009 but had a relatively high energy use profile and comfort complaints were common.
The recommissioning efforts utilized trend data analysis, spot measurements, and targeted functional performance testing, as well as thorough review and troubleshooting of the controls, to improve system performance and controllability.
Thirty-two issues and opportunities were identified with most of the improvement measures implemented as part of the recommissioning effort or shortly thereafter.  Calculated savings from the improvements amounted to nearly $16,000 per year, representing a 39 percent reduction in energy costs.